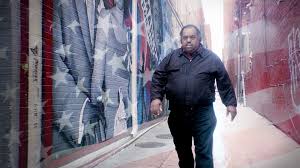 Perhaps one of the more disturbing trends of advances in media technology is that while social media has the power to bring us together, we are using it in ways that drive us further apart. We retreat to the safety of our camps, never having to experience the face-to-face interactions with those folks that disagree with us or even hate us. Accidental Courtesy: Darryl Davis, Race, & America is a new documentary about a musician turned social activist that dares to meet his enemies face-to-face and dialogue with them about their differences.

Davis has played with the greats, including Chuck Berry, Little Richard, and Wilie Nelson. He had a unique upbringing. His father was in the foreign service, so he traveled widely at a young age. Many of his classrooms might as well have been model UNs. So when he and his family settled down in the United States for the first time, its racism came as a belated shock to him. Yet Davis persevered, graduated from Howard with a degree in music, and began his lengthy career.

Yet he soon heard a deeper calling to befriend white supremacists. His argument was, “How can you hate me if you don’t know me.” By extension, he might be arguing that to know him is to love him. Since the 1990s, Davis has been traveling around the country, sitting at the table with KKK and other hate group leaders in open dialogue. Through these conversations, over two dozen of his new “friends” have walked away from their racist beliefs. Davis now keeps his spoils of victory–their KKK robes–at his home. 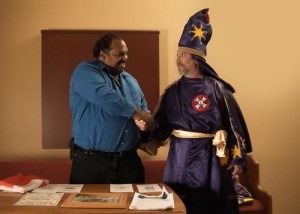 Accidental Courtesy is a celebration of an unsung hero, a man doing the hard work of dialogue at great personal risk. But it is no hagiography. It critiques his approach and asks some serious questions, particularly through His heated conversations with leaders of the #BlackLivesMatter movement, who believe that Davis has, essentially, sold out. They argue that while he is dining with KKK members, the messages they espouse motivate the systemic corruption that is destroying the African American community. It also appears that Davis isn’t finding many close friends among pone trial white allies in the racial reconciliation movement either. Mark Potok, a senior fellow at the Southern Poverty Law Center, doesn’t seem to be impressed with Davis’ work. He says Davis is working in retail while they’re working in wholesale.

The film closes with some lingering questions. While Davis’ approach certainly seems Christ-like, is it enough? Does it not demand more of the righteous anger that animates much of the Black Lives Matter movement? Is Davis’ approach productive? Is he successful even if he only converts one white supremacist? Or is he ignoring the severity and enormity of the problem? Is it all, as one of his detractors accuses, nothing more than a fetish?