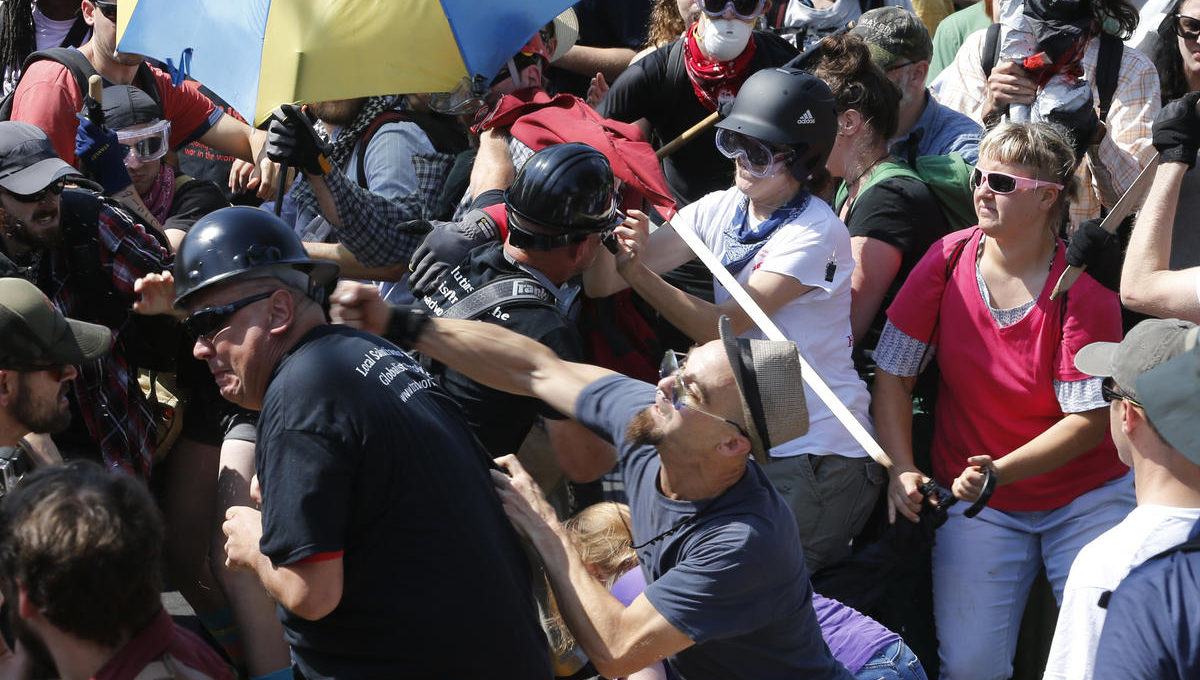 First, the grief. I was horrified by what I saw from online videos in Charlottesville this weekend. The sight of that car plowing into a group of peaceful protesters was stomach-churning. This was undoubtedly an act of terror from a vicious racist representing the darkest shadow of white supremacy in America.

This is compounded by the fact that I have family in Charlottesville, including UVA graduates. I have a cousin who works for the University and is beginning a Masters program there this fall. Another cousin’s counseling practice is on the downtown mall where the killing of Heather Heyer took place. Most posts from my family show they are devastated by this incursion of hatred into a place that they see as a bastion of culture in the midst of the breathtaking beauty of the Blue Ridge Mountains. It’s like part of their home has been taken away from them.

Now, the judgment. As much as it pains me to say it, we on the left cannot pretend this attack on the marchers at Charlottesville was unprovoked or without violence on our side. There are clear photos and videos of right and left protestors involved in brawls before the killing in Charlottesville. One protester held a sign that mirrored the “heritage” argument of pro-Confederate protesters: “My heritage is killing fascists.” Reports suggest the Charlottesville police stood by for some time while white nationalist and leftist groups fought it out in an unrestrained melee in Emancipation Park before finally breaking it up with tear gas and riot gear.

Considering the proud—and effective—tradition of nonviolent direct action in advancing progressive causes, I feel revulsion at the sheer selfishness of the hipster anarchists of the so-called “antifa” (anti-fascists) and their supporters. Most of them see violence against the Alt-Right as the ultimate act of “solidarity” with the marginalized groups the nationalists target. They may even see it as an act of redemption: putting their white, yoga-toned bodies on the line as an act of laying down their privilege once and for all.

Well, I hate to break it to you, my woke white friend, but taking on Mayberry Nazis while wearing the black baseball helmet you bought at Dick’s and the Kaffiyeh  you bought on Etsy does not erase your privilege. Choosing to do an act of violence when a non-violent act is sufficient is the ultimate mark of privilege.

And really, if you can step back from your righteous anger and strategize for a second, you’d realize this “stomp a fascist for Jesus” mentality will only serve to make the other side stronger. The Alt-Right are the bottom feeders of the new global culture. They are the sad white men living in their parents’ basements trolling liberal “snowflakes” online. Media outlets like Breitbart and the nationalist groups figured out these mouth-breathers (and I say that with Christian love) represented a constituency and started calling them together. Now, when they meet up In Real Life, they’re delighted to see all the angry leftists they’ve trolled online gnashing their teeth and ready to do them physical harm. Every punch inflates them, every bruise and scratch swells their tiny distorted egos. They must be very important if so many people are so mad at them. And they will surely benefit in increased membership and notoriety from the coverage they received this weekend.

As a Christian I believe I should never be involved in political violence. I know what you’re thinking: “Oh great, the Christian preacher’s going to let loose with some B.S. about ‘turning the other cheek.'”

You know us Christian preachers well; I am going to turn loose with that B.S., but with some interpretation. There’s a school of thought in liberation theology that Jesus was not simply preaching peace and kindness but offering practical strategies of resistance to an oppressed people against occupying powers. When Jesus said to turn the other cheek, he was referring to the backhanded slap of the soldier or slave owner to a subservient person. Turning the other cheek meant if they wanted to hit you again they had to punch you directly—that is to look you in the eye and acknowledge you as a person. This may not be a satisfying form of resistance, but it is resistance nonetheless, when violence simply wasn’t an option if one wanted to survive.

The practicality continued with the teaching of the Apostle Paul, and his phrase that we should “not repay anyone evil for evil.” Instead, Paul writes, “If your enemies are hungry, feed them; if they are thirsty, give them something to drink.” But this isn’t just sharing snack cakes and Snapple with someone who hates you. There’s a payoff for this: “For by doing this you will heap burning coals on their heads.” That is, you will gain the moral high ground.

Jesus and Paul were speaking to people who were subjugated. Unless they were Roman citizens they had no freedom to speak out and defend themselves. And they certainly had no right to protest. But that’s not where we are in history in our opposition to the Alt-Right. Which brings me to why violence against the Alt-Right is not only selfish but politically useless.

I have said in other posts that I believe America is at a threshold moment. The people who have been kept at the margins of power—women, people of color, immigrants, LGBTQ folks, people with disabilities—are building into a demographic wave that will wipe out the unrestrained power of unenlightened white straight Christian males. The election of Trump, the rise of white nationalism, the nihilistic Ayn Randian Congress—these are not signs of the rise of a new White Power complex, but signs of the End Times, the death rattle of a dying ideology.

This doesn’t mean we should take change for granted. The rear guard of this retreating army is setting the oil wells on fire. If they can’t own America, they’ll burn it to the ground. We should take their threat seriously.

But we should also fight the threat with the wind at our backs, as people who are assured of victory if we hold together and push back the right way. That means building up the democratic institutions we are destined to run—even as the losing forces of history try to tear them down. That means registering voters and winning elections. That means organizing locally and creating change in our own communities. And it means opposing the Alt-Right non-violently.

Violence serves its own purposes, it cannot be tamed, directed, or used for the “right” reasons. Violence quickly spirals out of control and inevitably leads to greater acts of violence. We can never know for sure if Heather Heyer might not have died if it wasn’t for the antifa use of violence egging on the unstable, alienated, and ultimately dangerous, man-children of the Right.

I want to call on my friends on the left to resist the self-indulgence of violence during these tense times. Our anger and frustration at the Alt-Right is real; these feelings are ultimately what gives us the energy to resist a movement that must be defeated. But we are the ones with the social, educational, and financial capital to build the future of this country. We are the ascendant political movement, not them. The Alt-Right is not powerful enough to require or deserve physical violence. We should be heaping hot coals on their heads instead.