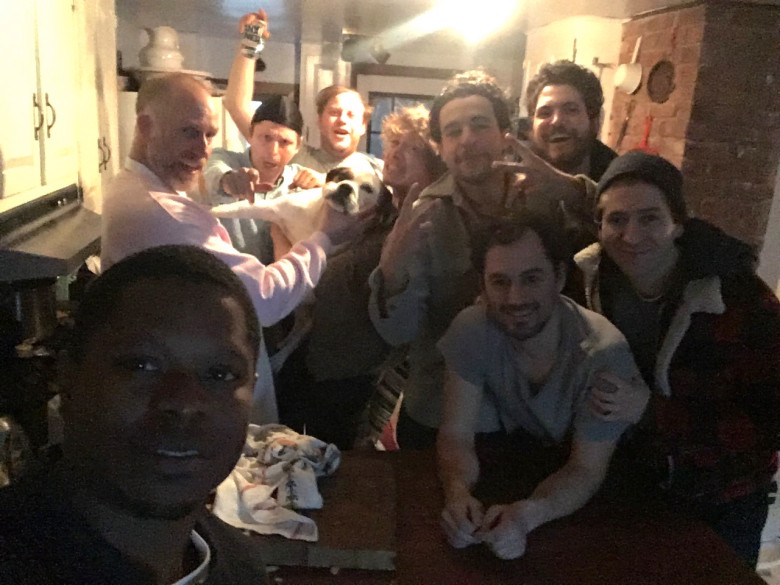 One of my most anticipated films at Sundance this year, Sebastián Silva‘s Tyrel, was billed as this year’s Get Out. It’s definitely not that, and that’s not necessarily a bad thing. In fact, those who are frustrated by this might want to closely examine why. Warning: a major spoiler below.

In Tyrel, Jason Mitchell plays Tyler, a young black man from New York, who goes away to a cabin in the woods for a mutual friends’ birthday party. Things get increasingly awkward for Tyler when he realizes that he is the only black guy at the party. As the weekend progresses, the guys drink, play practical jokes on one another, sing and listen to music (they’re big R.E.M. fans), and engage in broadly frat-tastic behavior. With each new joke, story, or song, Tyler feels out of place and struggles to connect, even with his closest friend. To cope, he drinks…heavily…which only makes matters worse.

Silva’s direction and the cast’s performances, particularly Caleb Landry Jones (also in Get Out) as the birthday boy, do a wonderful job of tapping into thriller/horror tropes that made Get Out such a huge success. Throughout the film, it feels like something horrific is about to happen to Tyler, but (SPOILER!), it never does. Any review of the film would be incomplete without addressing this, and thankfully it shouldn’t totally ruin the experience of viewing the film. Those who question or are disappointed with the lack of “action,” or “violence” in the plot should ask themselves why. Why do we need to see, yet again, more black abuse at the hands of white men? Is it simply a reflection of our obsession with violent narratives in American culture and cinema, or is it something deeper and more problematic?

In the post-screening Q and A, Silva said that he simply wanted to show how everyday life is hard enough for members of black and other marginalized communities. The title itself comes from one of the first micro-aggressions that Tyler suffers in the film, when one of the guys mispronounces his name. But the film isn’t the case of all the white guys being evil. One of the guests is an older gay man and make-shift parent, who attempts to keep the guys in line. Rather than being overtly, racially violent or aggressive, these twenty-somethings are drunk, ignorant, and insensitive.

Jordan Peele joked about Get Out actually being a documentary after the Golden Globes slotted it in the musical/comedy category. Tyrel actually feels more like a documentary than a horror film as Silva turns the lens on the community–straight white guys–that needs greater individual and collective introspection. In the process, it becomes a challenge to all of us to be more self-aware and sensitive to the diversity around us. It also shows us the day-to-day suffering we cause when we aren’t.