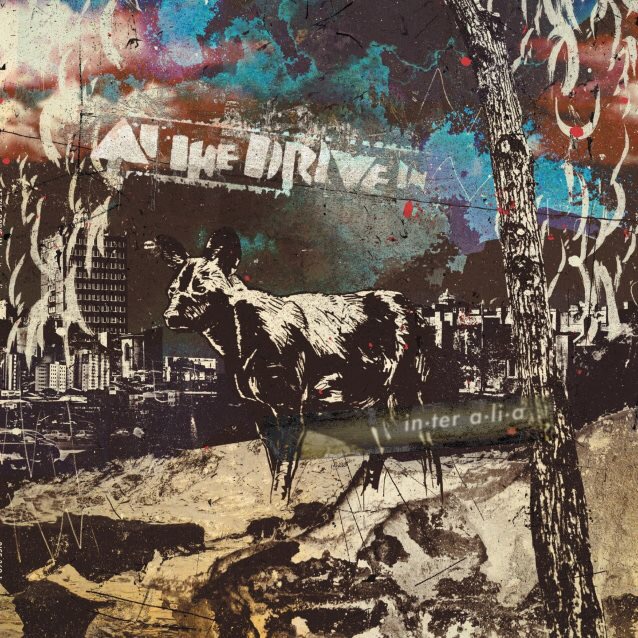 When I was 14, I took a chance on a record. I had heard the lead single on the local alternative stations, thought the video was a blast when I caught it on MTV, and couldn’t get the hook out of my head. I wasn’t really into the style of music but only because I had no idea what it was. It was punk – but spastic, expansive, tightly constructed but relentlessly hectic. This was no simple three chord anarchy – it was something far more monstrous. I had no idea what to make of it but I knew I wanted more – so I bought the album as soon as I could. I was on a mission trip to Washington D.C. staying at an old run down gymnasium, sleeping on a dusty couch in a break room. I popped the CD in, put my headphones on, and stared up into the darkness as the blistering intro of “Arcarsenal” set my night ablaze. I was never the same.

At The Drive-In didn’t so much change my taste in music as it set it into hyperdrive. At that point in my life I was a ska-punk kid, raised on Operation Ivy and Five Iron Frenzy. I appreciated harder punk but tended to stick with pop-punk more than anything for my pubescent problems. After listening to Relationship of Command once through, however, I needed to hear every single band even remotely related to whatever the hell it was I was listening to. Although I eventually collected their entire discography (and a few knock off B-side records along the way), I would revisit RoC often and with not a single bit of that initial unadulterated joy diminished. It was a perfect record from beginning to end – and I was devastated when it turned out to actually be the end.

Like many fans who were turned on to ATDI through RoC, I never had the chance to see them live. It’s well documented that At The Drive-In were simply designed to burn out. Coming on the scene with 1996’s Acrobatic Tenement, ATDI quickly earned a reputation for relentless live performances where band members risked life and limb flailing about the stage and audience, instruments and sharp edges be damned. Their music was post-punk before we really knew what that was – an ornate, tightly constructed slap in the face combination of guitarist Jim Ward’s longing howl, Omar Rodriguez Lopez’s electric gymnastics, Paul Hinijo’s and Tony Hajjar’s brutal drum and bass combo, and, of course, vocalist Cedric Bixler’s frantic snarl and vicious esoteric musings. They were a house burning with passion and innovation – it was only a matter of time before the roof collapsed.

ATDI lasted little over a year after RoC was released, brought down by the exhaustion of touring and Cedric’s desire to try something new. Millions of fans were heart broken, given a perfect record and left to ponder what could have been. It stung – but the band moved on. After the break up, they split into two – the more post-hardcore alternative outfit Sparta, led by Jim Ward, and the psychedelic post-rock The Mars Volta, led by Omar and Cedric. Both had their fans and both made a great go of it over the years (producing some near perfect albums of their own with Sparta’s Porcelain and The Mar Volta’s Amputechture) but, truth be told, it was never the same. These bands, and the numerous other projects they’ve been involved with over the years, were all immensely talented and fascinating to watch, but it was always bittersweet thinking about how bright the lightening in the bottle had once shown. With every new post-ATDI record, we all wondered “what if?”

Lo and behold, we were in luck. With festivals like Coachella building a reputation for reuniting bands, interviewers started revisiting the topic and were rewarded with news of reconciliation. In 2012, to the surprise of literally every fan, ATDI reformed and played at Austin, Texas’s Red 7 for the first time in over a decade. A handful of festival appearances and a mini-tour would follow, and it seemed like we’d finally get the chance for new music. But then – nothing much. Another handful of shows came and went with no real indication if it’d ever be anything more. That was until a social media post appeared out of no where as let us know: “This Station is Now Operational.”

After a build up of teases and the release of the behemoth of a lead single “Governed by Contagions,” ATDI officially released their first record in just shy of two decades with inter-a-lia. Now, it’s fair to say that the expectations were ENORMOUS. Over the years, Relationship of Command had taken on mythic levels of nostalgia. Sure, it was a perfect record but for many (myself included) it was far more than a record. It was a Molotov cocktail, it was a coup, it was an outright revolution. So, yeah, the standard set was impossibly high. So I won’t lie when I tell you that after the first couple of spins of inter-a-lia I was a bit underwhelmed. I was over the moon, impossibly over joyed, and embarrassingly giddy but…something was off.

The most obvious culprit was the absence of original band member and background screamer Jim Ward. It was clear after the initial split that Ward’s presence was a centering factor to their otherwise out of control nature, providing a more honed in structure to their song writing. Not to mention the invaluable counterpoint his full-bodied howl offered to Bixler’s unhinged delivery. In his stead is former Sparta guitarist Keeley Davis who does a damn admirable job mimicking Ward’s sound, subdued as it might be on the record, but it also doesn’t quite make up for Ward as a co-songwriter. The absence is notable but, after a few more listens, I began to see that that wasn’t entirely it.

inter-a-lia is an album of unbridled excitement. It’s a tour-de-force of pent-up passion almost as if they went into the studio hoping that they could capture the visceral violence of “Arcarsenal” and sustain it for a whole record. It’s an admirable goal, for sure, and one that belays their obvious joy at being back together but, it’s also not feasible. As a result, inter-a-lia ends up being a record of undeniable excitement but also indistinguishable direction. One of my first thoughts when playing through the record was that ATDI-reunion precursor band Antemasque (basically Bixler’s and Lopez’s post-hardcore warm up record) was far more versatile. For a band known to have defined and simultaneously pushed the boundaries of their genre, this record felt almost bland. This, however, was a another fundamental misunderstanding of what the band created. This record was meant to be played live.

Two weeks ago, a dream came true. 17 years in the making – the frustrated, anxious, desperate making – my dream of seeing At The Drive-In came true. Coming to Austin’s famous Stubb’s Amphitheater, At The Drive-In fulfilled my dream and then some. The then some was, honestly, hearing the new songs live. Don’t get me wrong, hearing classics like “Invalid Letter Dept.” and “Napoleon Solo” set my spirit ablaze in a way that I genuinely cannot describe but it was in hearing the new tracks played live that I got what was happening on the record. They made them to go crazy on stage.

Right now, ATDI aren’t interested in the contemplation of their craft. They’ve been there, they’ve more than done that. After years of genre/psychedelic exploration, these guys just wanted to rock together. And rock they sure as hell did. Despite the heat of the day (which Bixler made clear with his banter – it was uncomfortably hot), they put everything into the new songs and each one hit like they might has well already been classics. Revisiting the album, I no longer hear a muddled difference between “Pendulum in a Peasant Dress” and “Call Broken Arrow” – I hear ATDI getting ready to take it on the road and obliterate their exceedingly eager fan base.

inter-a-lia might not be the record ATDI would’ve made in 2002 but, for a record made 17 years after their breakup, it’s a damn fine testament to their skills, passion, and healed camaraderie. We can’t be certain if this reunion will last – with the weight of so much history, this could be their true final swan song. Having finally seen them live, I don’t simply feel at peace because of a dream come true but because I got the chance to see one of my all time favorite bands refuse to phone it in. I love this record all the more now, energized by an appreciation for what they’ve created for themselves. I hope I can see them again, and sure I hope for another record, but I’m satisfied to know that initial fire could be rekindled. The station is truly operational and it is a force to be reckoned with.