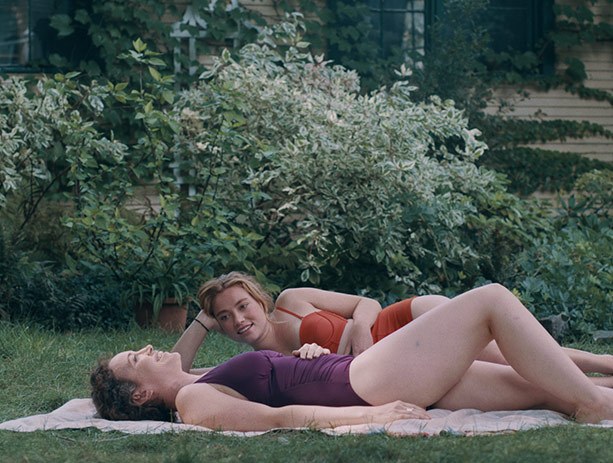 Last Week, I had the chance to see the West Coast and gay festival premiere of Princess Cyd, the latest from Stephen Cone. I also had the chance to sit down and talk with Cone about the film, and that interview will appear in a subsequent post. For now, here’s the review:

There’s still a strange cultural chauvinism in the LGBTQ community. Despite the trauma of AIDS that forced gay men and lesbians to put aside fissures that dated back to the women’s movement, the mutual fight for each other’s happiness in the marriage equality struggle, and the righteous fury we must bring to defend trans communities from “bathroom bigotry,” when it comes to cultural choices, we still tend to congregate with our own kind.

For instance, each year when faced with the queer cornucopia of films in the program for Frameline, San Francisco’s LGBTQ film festival, my thought process usually goes like this: “Hmmm…documentary on the Compton Cafeteria riots and the birth of the transgender rights movement, drama about a lesbian couple trying to adopt a child in the Deep South, or ‘Fun in Boys’ Shorts?’ I think I’ll go with ‘Fun in Boys’ Shorts!'”

So I’m glad I already knew director Stephen Cone’s work from his previous films The Wise Kids and Henry Gamble’s Birthday Party. Otherwise, I might have missed his fantastic new film that just happens to involve the coming-of-age of a young queer woman, Princess Cyd.

Princess Cyd captures the life disruption when a precocious teenager (Jessie Pinnick) visits her deeply intellectual, single-and-loving-it Aunt Miranda (Rebecca Spence). Miranda is a novelist of some renown living in Chicago, and between book signings, academic lectures, and literary soirees, she hardly feels equipped to take on a minor who’s chief interests seem to be sports, tanning, and asking impertinent questions.

“I don’t really read,” Cyd says as Miranda shows her the books in her guest room, immediately shutting down one possible bridge between them. “Do you believe in God?” she asks as they sun themselves in the yard. (Answer: I go to church. I believe in grace, and something greater.) “When was the last time you had sex?” (Answer: It’s been some time) “How would I have sex with a girl?” (Answer: Google it.) Cyd’s questions never stop.

Once Cyd gives Miranda a break and sets out to explore Chicago, she meets a cute barista named Katie (Malic White). With her short-cropped hair with shaved sides, Katie’s a little more life-savvy, and she seems to know immediately what she wants from the wide-eyed Cyd.

Katie asks Cyd back to her apartment, and they go up on the roof to see the view. A group of young filmmakers shouts across at them from the fire escape of another building that they need “a guy and a girl” to slow dance in the background of a scene they’re shooting. The girls giggle, but rather than correcting them on Katie’s gender, they end up in an awkward but adorable dance on the roof.

Another of the film’s lovely set pieces is a literary soiree held at Miranda’s house. Author friends, academics, and people from church come over to drink wine and talk about their favorite books. Among the guests is Anthony, a friend who Miranda is helping with a novel, and who everybody keeps wondering if Miranda will develop a romance with. And there’s a lesbian couple with a good looking grown son Ridley (Matthew Quattrocki).

The partygoers play storytelling games, and read favorite poems and passages of books for each other. It brings out one of the important subtexts of the movie, the power of narrative. (Cone has said the Miranda character is based on the Pulitzer Prize-winning novelist and liberal Christian essayist Marilynne Robinson).

The party-goers clearly love one another’s company and savor words like the wines and desserts they’re enjoying. Compared to the evangelical Who’s Afraid of Virginia Woolf? of the parties in Henry Gamble’s Birthday Party and The Wise Kids, this is by far the most easygoing gathering of Stephen Cone’s films so far.

The moment of conflict between Cyd and Miranda happens after the soiree, which Cyd sat gamely through before succumbing to the teenage “boreds” and heading upstairs with Ridley to smoke pot and have a make-out session.

After the party, Miranda, feeling boundaries have been crossed, wants to confront Cyd, and maybe even feels the temptation to start parenting. But she resists: “No, I’m not going to be that relative.” She simply asks Cyd not to smoke in the house anymore.

Cyd seems to feel she’s gotten off light. As Miranda turns to eat a leftover piece of cake, Cyd pushes one more button, “You know, maybe if you had a little more sex you wouldn’t eat so much.”

Miranda responds in a way that shocks Cyd:

“I understand: you’re finding your own joy, you’re engaging with your own stuff. That’s great. That’s how it should be. It’s a beautiful thing. But hear me: it is not a handicap to have one thing but not another. To be one way and not another. We are different shapes and ways and our happiness is unique and there are no rules of balance.”

Here the film could have easily slipped into typical coming-of-age fare, with the older adult playing the immovable object of resistance to the unstoppable ebullience of youth. Cyd tries to start a conflict, but instead she has to learn an important lesson: that adults have feelings, that people have limits, that there are lots of paths to happiness and all anyone wants is respect for their own choices. If Cyd curbs her behavior, it has to be because of her respect for Miranda as a person, not because she’s an adolescent forever pushing against the constraints of adult discipline.

This is typical of Stephen Cone’s films. Rather than just seeing the evolution of the lead character with other characters filling in set roles, we get to see the way the characters intertwine in relationship, changing each other in the process.

At the Frameline screening, we were lucky to have indie film impresario Bob Hawks in attendance. During the Q&A, Hawks brought up that Cone has a talent for introducing us to characters at exactly the moment when they are most ripe for significant change. While Cyd is obviously ripe for change (and bursting at the seams) Miranda is at an inflection point as well. Miranda has an enjoyable, even enviable life, but her time with Cyd brings to the surface an inkling that she may have a deeper need for companionship, love, and a celebration of her own sensual being.

I wasn’t wrong about queer communal tendencies at Frameline: the audience was made up almost entirely of women or trans folk. When Cyd shows up to the literary soiree dressed in a dapper tuxedo, there were catcalls from the audience. And no doubt many of the audience enjoyed the tastefully-shot sex scene between Cyd and Katie. (As did I, even as a gay man).

But seeing a gay male director’s film about strong women characters reminds us of an important lesson we should already know: There’s magic in good storytelling. Human experience defies labels. And whether sex or cake is your highest form of pleasure, you deserve love and respect.