After a week off, Nat Geo’s Breakthrough was back last night with a look at the cutting-edge scientists working to make aging better for us all. But is this necessarily a good or right thing? Tony Jones and I discuss below.

RP: While this episode isn’t my favorite, it still presents an intriguing core question. This episode focuses on both the process of aging and a group of scientists that are working to combat the negative side effects of that process. At heart, this episode is still asking the crucial philosophical question of what it means to be human. This week’s response could very well be that to be human is to age. However, this simultaneously throws into a more critical light the work that these scientists are doing.

Is aging a part of life or is it an illness that can—or must—be cured? If it’s the latter, is such an approach ethical or moral? Does preserving life for as long as possible present financial and social challenges that we are not prepared to meet? It is important to note that not every scientist is on board. For example, Zeke Emanuel (chair of the Department of Medical Ethics and Health Policy) plans to stop taking most medical treatments at age 75 and live out the rest of his life.

TJ: The most intriguing part of this episode, for me, is the juxtaposition of the elderly couple at the Mayo Clinic, battling multiple health problems, the middle-aged Emanuel, and the young researcher who entered MIT at age 14 and still seems too young to have so many opinions about aging. I found her to be precocious and arrogant, while the others were thoughtful and even wise.

I did appreciate that, about midway through the show, the ethical dilemma is surfaced: what are we going to do with all these people? That’s a real problem in a world that is already struggling to feed the people we do have. Even Senator Claire McCaskill seems to believe that if people live longer — if we “slow aging,” as she puts it — it will help the economy. But that only makes sense if people work longer and contribute to the economy. And let’s say the life expectancy increases by one or two decades, doesn’t that just forestall the same medical problems that will end up killing us anyway?

RP: My wife is a pediatric intensive care nurse, and my father is currently battling cancer, so much of this conversation hits home in ways that previous episodes haven’t. My wife encounters, on an almost daily basis, terminally ill children whose parents will simply not let go, even thought it might be in the child’s best interest. My father is getting whipped by chemo, and is one of many examples where the treatment is, for a time, more “invasive” than the disease. Again and again, the question arises: just because we can, should we?

Tony, what did you make of the elderly couple at the heart of the episode? They’re deciding whether or not they’ll pursue surgery. She, to me, is the personification of grace and a lesson in dying with integrity. 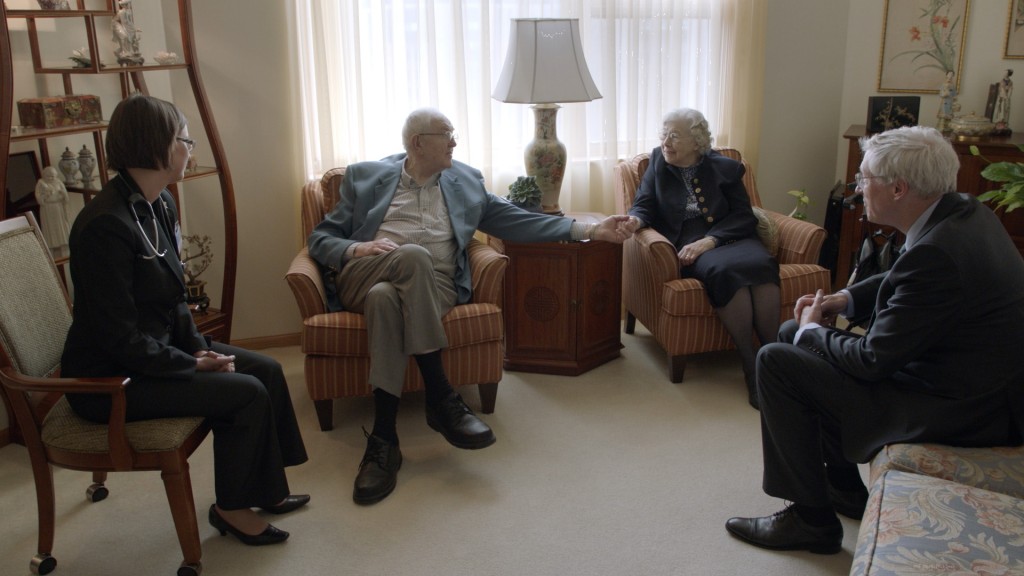 TJ: I love when she says, “Life is a pilgrimage.” It reminds me of my dear friend, Phyllis Tickle, who earlier this year stopped the radiation on her lung cancer after two treatments. She wanted to go out on her own terms, and she died with no regrets. She is another example of grace and courage. But even more of common sense — she didn’t feel the need to extend her life through extraordinary medical intervention. 81 years was a full life, she thought.

RP: This discussion of aging and delaying the inevitability of death raises yet another question for me. What makes life beautiful? One could argue that it is beautiful because it is fleeting. Scripture tells us so…and it’s almost as if God designed it that way? Is all this research working against God and the flawed life that God would have us lead?

On a creative note, it feels like the producers and writers missed another real opportunity to add a personal touch to this episode. Ron Howard has a career that spans decades, and he has aged in Hollywood successfully, which is no easy thing to do. At the same time, many of his films deal with similar themes.

TJ: I agree on that last part: more Ron! There are a couple quick glimpses of him at the beginning, but I wish he would have turned the camera on himself more, so to speak.

You and I and our GenX cohort have aging parents, so this episode is particularly poignant for us. As for me, I’m with Zeke Emanuel: may I live the days I have with passion and purpose and then not fight it when those days draw to an end.

RP: If these discussions of aging, dying, and death interest you, you might want to check out two other documentaries. The first, and it’s referenced in this episode, is The Immortalists The second is The Transcendent Man about Ray Kurzweil, a futurist that thinks we can beat death.

New episodes of Breakthrough air on Nat Geo on Sunday nights at 9:00.