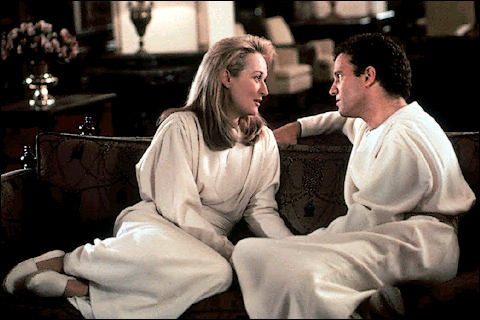 Few film and religion books are as intriguingly interreligious as Lyn and Tom Davis Genelli’s Death at the Movies: Hollywood’s Guide to the Hereafter. The authors look at a relatively unexplored genre, film blanc, from Christian, Buddhist, mystical perspectives and arrive at prophetic and inspirational insights into our fears of and suppressed obsessions with death, the afterlife, and what happens in between.

Film blanc is the lesser-known sibling of film noir, the darker post-war genre that reflected pessimistic worldviews with doomed characters and corrupt worlds. The film blanc genre includes such popular films as It’s a Wonderful Life (1946) and The Sixth Sense (1999) to quirky films like Outward Bound (1930) and Defending Your Life (1991). Other films that the Genellis discuss include Casablanca (1942), Between Two Worlds (1944), Resurrection (1980), Poltergeist (1982), Jacob’s Ladder (1990), and Hereafter (2010).

The Genellis use these films to explore the theme of transit, that mysterious time and space between death and what lies beyond. Depending on your theological or physical outlook, transit can take place both before and after our physical bodies have expired. Many of us might be moving through this world in a dream state, desperately needing to be awoken to the beauty and implications of our interconnectedness. Of course, when we die, our souls/energy/spirit will transition into another form of existence.

I appreciate how the Genelli’s don’t limit their engagement with films from one specific religious context. As a result, their analysis of these films reveals the real ways in which religions can be mutually informative and how, at heart, they are concerned with similar fundamental issues that plague the human experience. They also reveal how best to move through our world (spoiler: selflessly).

I am taken by the Genelli’s discussion of the importance and power of film. I quote a portion of their text at length:

It is true as well that as everyday life becomes increasingly indistinguishable from an action/horror flick playing 24/7–living in a state of world crisis, economic near-collapse, and the falling away of long-held securities and certainties–a desire or need arises in many of us for knowledge about other dimensions of being, particularly those we suspect might lie beyond this “real” one. In such times, the great movies, and particularly the classic transit movies, can provide a grounding unity; they remind our fractured society of the truths we all know and the goodness we all yearn for. (127)

Like all good film criticism books, Death at the Movies reminds me of both why I love classics like It’s a Wonderful Life or Casablanca while introducing me to previously unknown films like Dead of Night (1945) or Purgatory (1999), which will almost surely become new favorites. On the flip side, their summaries of these films reveal that the art form not only embodies our collective fears, hopes, and dreams but pushes back against traditional expressions of religion when they do not address them compellingly enough.