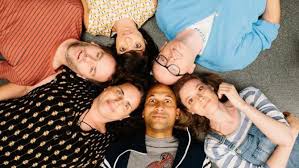 A film about members of an improv group going through life’s struggles with a cast featuring the likes of Gillian Jacobs, Keegan-Michael Key, Chris Gethard, Kate Micucci, and Tami Sagher is sure to be a hilarious hit. Add writer/director Mike Birbiglia in the lead, then you’ve got something that transcends the merely comical and rises to authentic, emotional heights. Don’t Think Twice is one of the best films to premiere at SXSW this year.

Miles (Birbiglia), Jack (Key), Samantha (Jacobs), Allison (Micucci), Bill (Gethard), and Lindsay (Sagher) are members of the Commune, a popular improv group in New York. They’re all talented comedians and most of them—especially Miles and Jack—are eager to get to the next level. As their pre-show mantra goes, they’ve got each other’s backs, that is until Jack gets a spot on Weekend Live (think SNL) and instantly becomes more famous than the rest. This throws a wrench in the remaining members’ performances as fans show up demanding to see Jack, who no longer regularly performs with them. They begin jockeying for a spot on the show, pressuring Jack to submit writing packages to his producer. Not only is the group unraveling, their venue is being taken over by an Urban Outfitters. In various ways, each of these comedians must navigate their collective and individual challenges, and it’s not too much of a spoiler to say that the film film ends on a completely realistic, well-earned high that makes it feel like an instant classic.

At the moment, film and television are benefitting from a wealth of great comedic talent that can also play it straight…and damn good too. Gillian Jacobs, who, it feels, has taken this space by storm with her work in Love on Netflix, reveals added range here. Key should demand further consideration for more serious roles, as he’s every part Jacobs’ equal and shares a real chemistry with her. Birbiglia proves to be a writer/director worth following closely. His debut, Sleepwalk With Me, is streaming on Netflix, and if you haven’t seen it, you should. As good as it is, Don’t Think Twice is even better, as Birbiglia confessed in the post-screening Q & A to being more confident going into production on it.

Though Don’t Think Twice takes place in the niche world of improv, it’s themes are much more universal, themes of aspiration, regret, jealousy, friendship, family, and belonging. While Miles sees meaning and value in moving on, Samantha sees the meaning in the moment and the value in belong to a community that embraces her like family (she left hers at age 16). Jack struggles with the experience of success and how we take care of—or betray—those who helped us out along the way. Where Miles obsesses over his past (“I was Jack’s teacher,” he repeatedly tells anyone who’ll listen after his partner makes it), Allison, Bill, and Lindsay quietly put in the work fine-tuning their writing portfolios to varying degrees of success, which Miles ultimately resents.

It’s these universal themes that make Don’t Think Twice such a painful and uplifting film to watch. We all know those feelings of trying to carve out a career for ourselves and the struggle of growing within that space. We also know the anger and frustration of watching people succeed while we toil away in obscurity. We would do well to model the characters here who—even though they momentarily let it define them—improvise with the mess of their lives to create a new story. Like his characters, Birbiglia takes what could be a messy narrative about the world of improv comedy and turns it into this marvelous reflection on friendship and family.