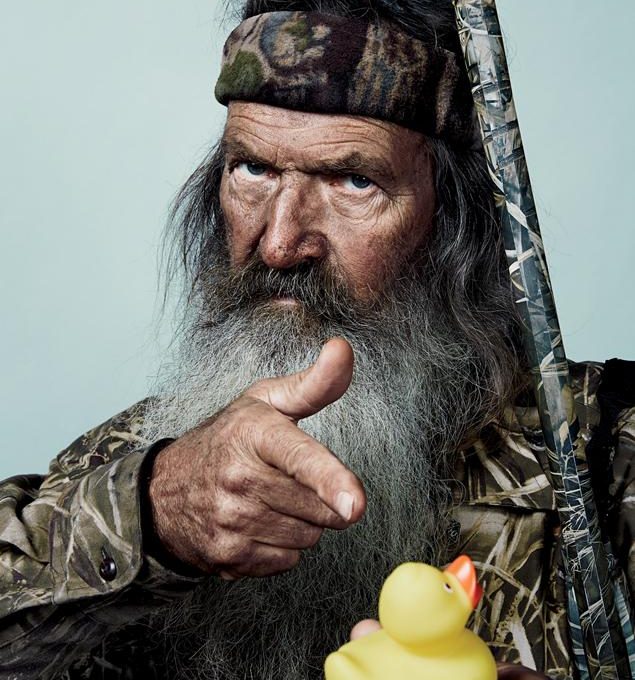 The news is splashed all over the Internet today about Duck Dynasty star Phil Robertson’s homophobic and racist comments in the January 2014 issue of GQ. Huffington Post calls the comments “shockingly vile” in their headline, and for once, they don’t exaggerate. The article reveals for a larger audience much of what Phil’s sermon from 2009 already revealed years ago, even quoting the same Bible verses. The article supports my observation that Phil sees himself as part of an ordered universe in which man–and I mean man–is at the top of the natural order and all other creatures are placed at his disposal for his use. The denial of this order is what has caused all the problems of the world, and if people would simply repent, up to and including hunting for their own food, the world would be reordered.

Phil’s comments in the article are far more graphic than he would probably go into at one of his church gigs. He makes comparisons between the anus and the vagina as a location for sexual pleasure for men. He then goes on to compare homosexuality, at various points,  to bestiality, alcoholism, and terrorism.

A few observations on the article:

None of these comments are all that surprising. Duck Dynasty is a show about lovably gruff backwoods hunters. But one doesn’t get lovably gruff hunters without the backwoods politics and religion that go with it. It’s disappointing to me that someone couldn’t muzzle Phil from expressing his more extreme beliefs. I thought the show had a unique ability to entertain Red State and Blue State viewers, but I’m afraid this may be the end of any cultural crossover appeal–and perhaps, if public outrage puts enough pressure on A&E, the end of the show.  This would seem to be a situation in which reality has impeded on reality television.