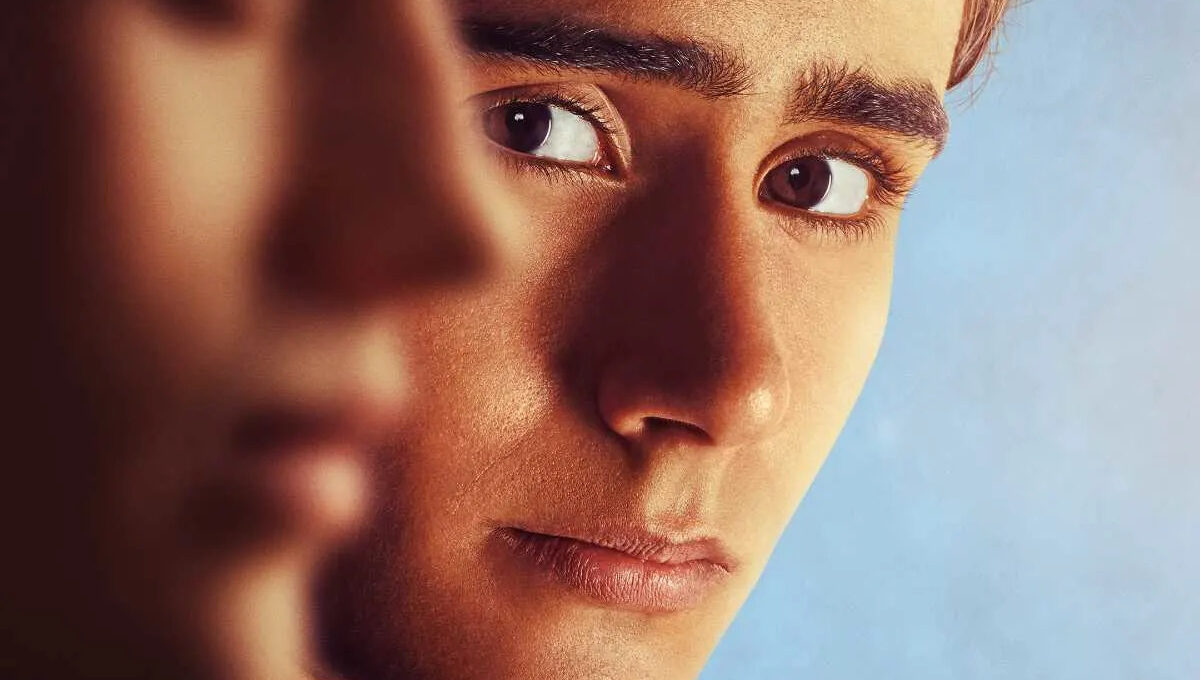 The second season of Love Victor is now streaming on Hulu. In case you haven’t been camped out at your television during the pandemic anxiously awaiting the next season of this gay teen coming out drama, here’s a brief recap.

Love, Victor is the TV series continuation of the hit movie Love, Simon, which is a gay coming out story done in the style of a John Hughes film. Both stories take place at fictional Creekwood High School, in a wealthy suburb of Atlanta. Love, Victor picks up after Simon’s (Nick Robinson) class has graduated. Victor Salazar (Michael Cimino) comes from a traditional, working-class Latino family. His mother, Isabel (Ana Ortiz) in particular is a devoted Catholic.

In the last episode of the first season, Victor had just come out to his parents: As in, “Mom, Dad, I’m gay” – cut to black, roll credits. Before that scene he had just broken up with his girlfriend Mia (Rachel Hilson)—during prom, no less—and proclaimed his love for the dreamy Benji Campbell (George Sear).

Throughout season one, Simon, away at school in New York—which is where all TV and movie gays go to college—had acted as Victor’s, ahem, fairy godmother, listening to his complaints and answering his questions about coming out. Conversations between the two happened over long, rambling text messages, because Gen Z has reversed millions of years of human evolution and lost the capacity for verbal speech.

So, if we’re caught up, here are some thoughts on season two of Love, Victor. I’ll make non-spoiler comments first.

A big deal was made about how the first season of Love, Victor was filmed for Disney+, and ended up on Hulu. The show’s creators said since the second season was written for the more adult channel, it would be no-holds-barred in portraying teen lives. There were some good and bad parts to how the writers dealt with the assignment of making a more adult show out of Love, Victor.

Let’s start with the good part. The story arc about Victor’s relationship with his mother, Isabel, is done extremely well—she goes on a believable journey that takes her faith seriously without turning her into a villain. At first she’s disturbed by Victor’s coming out and by his relationship with Benji, and seeks advice from her priest. Father Lawrence (Sean O’Bryan) sticks to the party line and tells her, “You’re right to express your disapproval if you want Victor to know God’s love.” She and Victor have several tense conversations, and at least one mortifying moment when she finds Benji and Victor en flagrante in Victor’s bedroom. These eruptions are followed by long silences. As Victor says, “We live in a constant state of weirdness. It’s the Catholic way.”

Eventually, Isabel acknowledges she’s not doing enough to accept Victor and that she needs to be a better mom. She explains that “From a very young age, I was taught that being gay was shameful…” and although she can rationally distance herself from those beliefs, “These things that I was taught when I was younger, they are so ingrained in me.”

As with many parents, the breaking point comes for Isabel when she finds her children being judged by others. After she finds out the priest has told her younger son, Adrian (Mateo Fernandez) that the Bible condemns homosexuality, and therefore, Victor, Isabel takes on the priest with mama bear ferocity:

“I have been raised to believe a lot of ugly things that will probably take me the rest of my life to unlearn. But I will unlearn them. And I won’t pass them on to my kids.  And no matter what you or the Church say, I know in my heart that God loves my son. My beautiful, perfect, gay son.”

As I mentioned in my comments about the first season of Love, Victor, Catholicism seems like more of a complication for Victor’s family than for him personally. At least as far as Isabel’s faith is concerned, the show’s creators have presented this sensitively, and with some knowing humor. I love the line in the second to last episode where Isabel says she’s found a new congregation whose website says, “‘All Are Welcome,’ which is Catholic for ‘less homophobic.’”

In the process of providing a more adult story arc, the writers addressed some important issues affecting young queer people. An early episode had to do with how Victor fits in with his friend groups now that he’s come out. When Victor finds himself caught between rejection from the basketball team, and judgment from Benji’s queer musician friends that he’s a “straight boy fantasy,” Victor asks, “What’s the exact level of gay I should be?” Issues of sexual discovery and how two men go about the mechanics of having sex factor into one of the episodes. (Although, as usual this season, Simon punts when asked to offer Victor specific sex advice.) Another gay student at his school, Rahim (Anthony Keyvan) comes out to Victor and they start up a friendship. In one episode, Victor and Rahim deal with the realities of hook-up apps and the way they often expose racist and anti-femme prejudices in the gay male community. (“Must get rid of toxic in community.”) The problems of LGBTQ youth and substance abuse also get some important airtime.

Okay, now the down side. What was missing from this season as the teen characters dealt with more complex issues was any sense of guidance from older or more experienced people. The conversations between Simon and Victor petered out after the first couple of episodes. After Victor came out, his parents were emotionally M.I.A. as they dealt with the news, so they weren’t really providing him with any direction. Also apparently, there are no more teachers at Creekwood High, except the basketball coach (Andy Richter).

There were so many situations the kids seemed to just stumble through without any help, except whatever “best friend” advice they could give to each other. I know this is something teenagers are prone to doing, but I wonder if the writers couldn’t have shown a better way. Young people need to understand that when your parents aren’t the best people to talk to, there are other people—like teachers, coaches, adult friends, extended family, even support groups or hotlines, or whatever equivalent the post-verbal generation can use to reach out with these days.

This is especially disappointing as the concept for the first season was based on mentoring. As the show got more “adult” this season, it seemed like the characters were left to figure things out on their own. The message to young queer people seems to be that becoming an adult means handling problems by yourself. The message should be that becoming an adult queer person means building circles of support of trusted friends and mentors and that it’s okay to ask for help.

Okay, some comments on the arcs of specific characters in the show:

For the life of me, I cannot understand the break-ups or break-downs between Lake and Felix, and Victor and Benji. It seems like all of them were based on miscommunication. Again, some adult advice would have helped here.

In Lake’s (Bebe Wood) case, if a young person has a friend like Felix (Anthony Turpel) who is sixteen and having to manage his mother’s mental illness by himself, it’s okay to talk to an adult about it. And it’s okay for adults to step in and do something about it. Felix may have blamed Lake for not “keeping a secret” about his mother’s mental illness, but eventually he should have realized he was wrong and thanked Lake for caring enough about him to get him help. You know, rather than dumping her for Pilar (Isabella Ferreira).

Victor and Benji’s situation is more complex. In Victor’s case, he found out about Benji’s drinking problem the wrong way—through Benji’s mother “outing” him as being in Recovery. Victor then told Rahim about it, not knowing that the rules of Recovery programs are that anonymity should be respected. Also, Victor and Rahim bonded over their frustrations that rich white people like Benji don’t understand the responsibilities of children of immigrant families. So the problems between Victor and Benji seem to be cultural misunderstanding–whether that’s about immigrant cultures or the culture of Recovery programs. Again, some sensitive conversations with more experienced adults—perhaps even older gay men—might have helped Victor and Benji.

We’re left with a season-ending cliffhanger over whether Victor chooses Benji or Rahim. I have to say I’m Team Benji. Honestly, if they can’t work out their first major disagreement as a couple, I don’t have a lot of hope for their future relationship prospects. And really, Victor and Rahim seem more like “sisters” than boyfriends anyway. I mean, they’ve already sung karaoke at a gay bar together.

The character I felt the most sorry for this season was Mia. It seemed like each episode was designed to see how everyone could make Mia’s life suck more. By the end of the season, just when she’s getting settled down, overcompensating for her gay boyfriend by dating her super jock boyfriend, her dad gets an offer to be president of Stanford. [Because the current president is retiring and wants him to “take over” (???)] I know Lake is moving in a Sapphic direction in the last episode, but Mia really needs to be the one to consider leaving men behind. If anyone needs to run off to the woods, join the Coven and “live deliciously,” it is she.