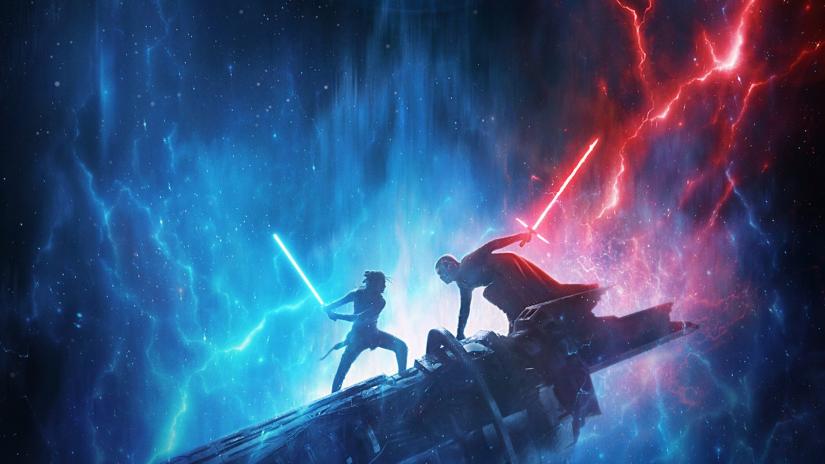 (Some spoilers ahead.) I liked The Rise of Skywalker. I’m aware this is either a very popular opinion or a very unpopular opinion. If you are a more traditional Star Wars fan, this was the closure to the Skywalker Saga you both needed and expected. If you are a “cool” Star Wars fan, particularly one who loved the quirky and genre-bending The Last Jedi, you found it to be a horrifying negation of all that was good and beautiful in the Galaxy.

I liked both this film and its predecessor in part because I approached the films with fairly low expectations. The first Star Wars, now known as A New Hope, was the first movie I ever saw in a theater. I was three years old. I literally grew up with the original three films. I long ago accepted that no movie will ever recapture the childlike rapture with which I watched those films. That’s okay.

What I particularly liked about The Rise of Skywalker was the middle portion where Rey, Poe, Finn, C3PO, Chewbacca, BB-8, and their little dog Toto set off together to find the Sith Wayfinder. (Which sounds like a product put out by Amazon.) Star Wars is always at its best when it has a rag-tag troupe of characters chasing across the Galaxy after some MacGuffin or another. Having C3PO suddenly unable to translate something because of a decades-old bureaucratic SNAFU by the Galactic Senate was a hilarious plot twist.

The ending was an entirely derivative retread of Return of the Jedi. This makes it a lot like the previous two films, which were entirely derivative retreads of A New Hope and The Empire Strikes Back. If I’m being generous, I could say the repeat of these story elements adds to the mythological character of the films since mythology is the kind of thing that repeats itself generation after generation.

The critics’ and “cool” fans’ reaction against The Rise of Skywalker has been completely overblown. I had never heard the term “fan service” until this movie came out. Most every blockbuster film that comes out these days is an act of fan service. To condemn Star Wars for fan service, especially if you went to see more than half the 187 Marvel movies, is sanctimonious.

One of the objections to The Rise of Skywalker is that it seemed to negate the idea suggested in The Last Jedi that the Force might become more democratic—that any child who was “Force sensitive,” regardless of lineage, might develop into a Jedi. I don’t think The Rise of Skywalker actually negated that idea. It’s possible, having defeated the Emperor once and for all (?) that Rey will set up her own Jedi Academy and scour the universe recruiting every kid that can levitate a broom. One of the main arguments supporting the “Restorationist” interpretation of The Rise of Skywalker is that Rey is revealed not to be the child of “nobodies.” So apparently some people actually believed Kylo when he told her that? This is Star Wars. The biggest plot twist in the whole series was based on a surprise revelation of paternity. Kylo’s real name is Ben, as in Ben Kenobi, who was also a noted liar when it came to family ties. I went into this film assuming we would find out who Rey’s real family was. I half expected Kylo, once he revealed the truth, to say “What I told you was true…from a certain point of view.”

Along with The Rise of Skywalker not being that bad, The Last Jedi was hardly the Citizen Kane some cool fans and critics seem to be remembering. Are we forgetting about the meaningless snipe hunt for the Master Code Breaker? Are we forgetting the criminal under-use of Laura Dern? Worst of all, are we forgetting the clunky backfill exposition provided by Luke “explaining” Kylo Ren’s turn to the Dark Side? Somehow we are meant to believe that Luke Skywalker, who brought out the good in Darth Vader, a genocidal maniac, was so frightened of Ben Solo, a kid who had probably just been listening to too much Morrissey, that he nearly killed him. Luke retreating to an island to whine about how unfair the Universe has been to him makes perfect sense based on his previous character. Luke nearly killing his nephew—a teenager who he was supposed to mentor and teach—doesn’t make any sense at all. I’m completely fine with introducing moral ambiguity into the story arc of a heroic character, but only when it fits.

To me the three Star Wars sequels have been about our nation’s current generational conflict. Rey is the ultimate Millennial—absurdly self-confident and overachieving. She flies the Millennium Falcon and wins her first light saber battle without any training. Kylo Ren is a Gen X-er—mopey, goth, spiritually conflicted. He resists any tendency to become someone’s disciple, even the Emperor’s when he offers him unlimited power.

Luke and Leia’s generation represents the Boomers. They tend to divide their anti-establishment qualities into “Light Side” and “Dark Side” camps. The Light Side partied with the Rebellion at Woodstock. The Dark Side volunteered or were drafted into Vietnam. They fail to see how both sides have squandered the institutions their parents handed to them. Let us not forget that all the destruction since The Empire Strikes Back could have been avoided if Luke had simply accepted his father’s offer to join the family business. In The Last Jedi, Luke reminded me of every Boomer who got free tuition to the state university, then spent the next forty years starving the system by voting for anyone who promised to lower his taxes. He got his training from the last of the Jedi masters, but rather than passing it on to the next generation, he decided this whole Force thing was bogus and dropped out.

This is why Rey and Kylo always had a connection: they were both victims of the previous generations’ death-battles with each other. They had to press forward without mentors, each in a manner that was generationally distinct. Rey climbed the meritocracy with the hope that one day she could run things the right way. Kylo questioned the destructive conflicts that he had been taught were supposedly essential and unavoidable.

I found a lot of resonance with the end of The Rise of Skywalker and where we are today. The anti-establishment mania of the previous generation, whether “Light Side” or “Dark Side,” has become so decadent, so curdled and rancid, that it has led our society to the brink of complete breakdown. There are new generations rising up, more diverse in background and capacity for imaginative problem-solving than even the heroes of the Luke and Leia generation. They will make mistakes. They will undoubtedly fail to live up to their potential. They will not succeed in building Utopia. The Old Rebels should step aside and let them lead anyway. It’s their time.