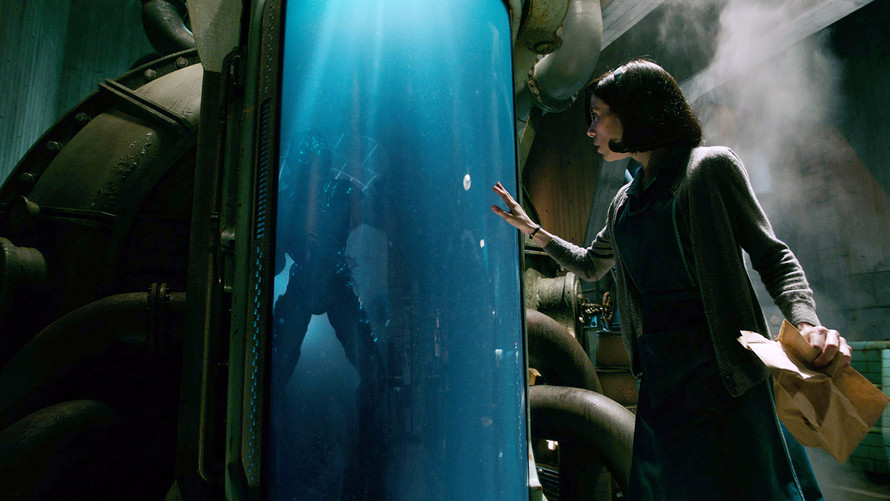 The Shape of Water works on several levels: as a Cold War spy movie, a fantasy tale, and as an homage to old Hollywood. Like director Guillermo del Toro‘s Pan’s Labyrinth, it features a bright but lonely female character coming into her own through her interaction with a magical monster. It’s a fairy tale for adults, told by one of the masters of visual storytelling.

The film started with early awards buzz at the Venice Film Festival, where it won the Golden Lion, and culminated the awards season with the Best Picture Oscar and the Best Director award for del Toro this past Sunday. Del Toro’s win fulfills the promise many saw in his work and two other talented Mexican film directors, Alfonso Cuarón, and Alejandro Iñárritu, when they began making successful indie films in the late 90s. All three have now won the Academy Award for Best Director.

The Shape of Water takes place during the early 1960s in Baltimore. A mute woman named Elisa (Sally Hawkins) lives in a rundown flat, where she has a close friendship with her next-door neighbor, Giles (Richard Jenkins). Giles is an advertising artist, who is, in the parlance of the time, a “confirmed bachelor,” and he introduces her to the wonders of golden age Hollywood movies.

Elisa works the graveyard shift as a janitor at a government facility. She and her talkative friend Zelda (Octavia Spencer) have security clearance to clean the entire building. One of their cleaning responsibilities is a top-secret lab that has recently received an “asset” brought in by a ruthless government agent Dick Strickland (Michael Shannon) from South America.

One night Strickland comes stumbling out of the lab, bleeding profusely from his hand. Elisa and Zelda are sent in to clean up pools of blood and find two of Strickland’s fingers on the floor, which they save in a paper bag. They look into the tank and see a scaled, humanoid, amphibious creature.

A few days later, Strickland calls Elisa and Zelda into his

office, his fingers sewn back on and his hand bandaged. Dressing them down as inferiors, Strickland warns them against interacting with the creature. His disgust with the creature is theological. He calls the creature “an affront,” the result of a sinful world. Humans are made in the image of God, but this creature can’t be: “Do you think God looks like that?”

Instead of heeding the warning, Elisa befriends the creature and teaches him sign language so they can communicate. She soon finds out Strickland intends to kill and dissect the creature. She enlists her neighbor Giles in a plot to save him and they spirit him out of the lab in a laundry truck. Once they get him home, they place him in Elisa’s bathtub.

Does it sound strange to say that at this point the film gets weird? Elisa and the Amphibious Man begin an affair, their coupling taking place in and around the bathtub. At one point, they even flood the bathroom, and in a moment of magical realism, the whole space fills up like a water tank, facilitating their floating lovemaking.

In order to save the Amphibious Man, she must devise a way to release him into Baltimore harbor before Strickland can hunt him down and kill him.

Del Toro’s films are a visual feast, and in this case the colors are the best dish. Del Toro and his production team have created a mermaid’s palette of filters, sets, and lighting. Whether blending the institutional blue-green of the lab with its blue-hued fluorescent lighting, the green algae-like substance that floats around the pool of the Amphibious Man, references to key lime pie or lime green Jell-o, or the wondrous aqua-hued love scene in the bathroom, the viewer feels soaked in the visual ambience of the film.

The colors are also an important part of the storytelling. Agent Strickland, in his organizational man white shirt and black suit, seems impervious to his lush surroundings. And yet the blue-green of the Amphibious Man imposes itself on him in unexpected ways—in the teal Cadillac he drives, in the green candy he chews incessantly. Even Strickland’s mangled fingers, protruding from his wrapped hand, resemble one of the webbed flipper-hands of the creature. The visual palette gives clues to the outcome of the film, the kind of inexorable power the creature has over all he touches, his green and liquid world seeping into everything around him.

Much of the film is a reflection on who, exactly, is made in the image of God—or who might even be a god. The characters who try to save the Amphibious Man all reflect some aspect of the creature. Like Elisa, the creature understands what it’s like to be constantly out of one’s element, gasping for breath. The creature is colorful like Zelda, not just the color of her skin, but her personality. The creature is queer, rejected, and feared, like Giles.

Working on the level of fairy tale and fable, del Toro paints his characters broadly. His films often portray brute civilization trying and failing to impose itself on a wilder, more organic universe. The political undertones of The Shape of Water act as a warning to the Stricklands of the world: the “other” you are trying to contain—women who act independently, gay artists, refugees from Latin America, people of color who are smarter than you—have a natural, even spiritual, power that is stronger than you can keep at bay. The shape of water is formed by the container that holds it. But if the water rises up, it overflows the boundaries imposed on it and washes away everything in its path.