Brand New know exactly who they are – the rest of us aren’t really sure anymore. In their 16 years of existence, Brand New went from helping redefine and popularizing the massive punk rock sub-genre known as emo with bright hooks and maudlin meditations to deconstructing it completely through distorted expansion and existential contemplation. Where once they could be mistaken for just another product of the blink-182 generation, by now Brand New sound more akin to Fugazi after a couple years in the monastery. And the monastery metaphor is pretty apt – for a band that used to grace Alternative Press seemingly every other issue back in the day, Brand New have become incredibly adept at being almost nonexistent. Rarely giving interviews, going on tour, or even hinting at new music, one day fans looked up and Brand New had erased their entire online presence and left only one thing behind: a call to “fight off your demons.” If we still know anything about Brand New, it’s that they’ve meant it.

After their breakout debut – the bouncy, yet depressive, Your Favorite Weapon – Brand New hit hard with the instant emo classic, Deja Entendu. Aside from abandoning their typical pop-punk construction for a bit more of an atmospheric experiment, the album notably marked singer Jesse Lacey’s growth as a songwriter, eschewing simple tales of woe-is-me heart break for bleak ruminations on the pressures of empty sex and death seen from a distance. It was not really the typical emo faire at the time and that was just the beginning. After the accolades, Brand New could have played it safe but there seems to have been a thorn in their side. After nearly three years of radio silence, Brand New finished wrestling with their demons in the studio and released a dark, daunting masterpiece entitled “The Devil and God Are Raging Inside of Me.” 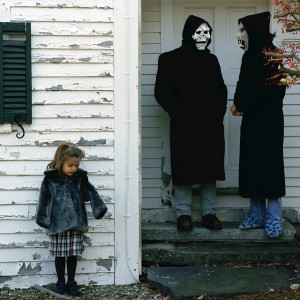 After lulling listeners into a false sense of familiarity for about 30 seconds, the album explodes with a far harsher and heavier anger than Brand New had yet explored. Long gone were the straight faced teen angst tales of unrequited love or the pains of growing up and in their place came exhausting existential crisis and reflections on morality, self-identity, and self-worth.  The album is one slap-in-face prayer after another, a prayer book for the broken and disillusioned, as if Saint John of the Cross had soundtracked his dark nights to Rites of Spring. Although the album undoubtedly means a myriad of things to countless listeners, it’s hard for me to divorce the incredibly rich religious imagery from the pain of seeking spiritual honesty. A masterpiece in what I’ve personally placed under the category of Existential Christian Music (Manchester Orchestra, Page France, mewithoutYou, etc.), TDaGARIM is essential listening to anyone with a glimmer of the Spirit despite the chip on their shoulder.

This introduction is in service of reviewing Brand New’s recent performance at Concrete Street Amphitheater in Corpus Christi, Texas where, for the ten year anniversary of the album and in honor or their impending disbandment, they performed this incredible album in its entirety (could I have seen the show in a more appropriately named city? I think not). Before this, I had seen Brand New twice, both before and after Deja Entendu. But, because of timing and their considerably decreased touring schedule, I had missed any performance of both TDaGaRIM and the (harsher, criminally underappreciated) follow up Daisy. As someone who needed TDaGARIM during my own dark night, I was ready to see what kind of show Brand New had built after all these years and what sort of presentation they would utilize to honor not only the space of the album but the entire mystique of persona that they had built up in the following years. They did not disappoint.

After a spirited, if far more typically emo, couple of opening sets by up and comers Modern Baseball and the Front Bottoms, Brand New took the stage in complete darkness and slowly began to emerge from the shadows, epically drenched in fog and lowlight, rallying the crowd to a frenzy with one of their catchiest and most beloved tunes, “Mix Tape.” With the whole auditorium pouring their hearts out like the sad high schoolers we all once were, the set was off to a rousing start. 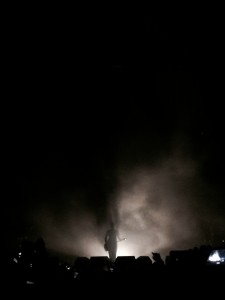 Opting to perform their “encore” before lunging into TDaGARIM, we were treated to a wonderful selection of cuts from Deja Entendu. Of particular note, at least for me, they even played the heart wrenching album closer “Play Crack the Sky.” As one of my all-time personal favorite songs, this was a special, and moving, treat. If there’s anything emo is good for, it is the invoking of emotions (who would’ve thought?) and, between Lacey’s lyrics and the band’s incredible mastery of the form, there are few artists who can stir these feelings so acutely as Brand New. 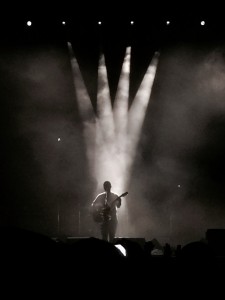 Speaking of feelings – once the first notes of TDaGARIM album opener “Yeah” began, we all knew that the visceral atmosphere between the audience and the artist would only increase. With the drop of the first scream, the audience was right there in tow, screaming their lungs out in joyous frustration right along with Lacey. To say emo fans are passionate is a bit of an understatement – it was obvious these songs meant something to all of us and we were there to share in their meaning. There are few sensations as exhilarating as being a part of an audience who are all in it together, whether it’s dancing or screaming, and this was one of my personal favorite experiences of this movement.

Outside of the palpable and electrifying emotional resonance that these songs held, two things of particular note really struck me about Brand New’s final tour. Firstly, they have only grown tighter and more confident as a band. Despite the rare tours or dearth of new music, they not only sound impeccably rehearsed but also confidently experimental. Ever since Deja Entendu, Brand New have practiced allowing their songs to breathe and, at times, meander organically. Live, it seems they’ve truly learned how to control and effectively explore this approach. Throughout nearly every song, the band either digressed into small detours or outright bloomed into surprising sonic landscapes that served to bolster already powerful songs into a whole other level. For the one time desperately standard emo band, it is moments like this that make the fans desperate for any and everything they release – they’ve truly found a unique and unpredictable approach to the genre. 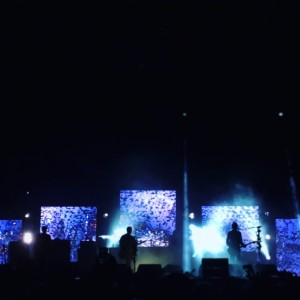 The second aspect of note was the stage presentation itself. Once again, Brand New have worked hard to basically become ghosts – no longer presenting their hearts on their sleeves, opting instead to hide their personas behind cryptic messages and dense spiritualist lyrics. It seems Lacey really couldn’t take getting “paid to make girls panic when [he] sings” because he can barely stand to show his face. Instead, the band was brilliantly lit as every angle but from the front, leaving their imposing silhouettes against a series of screens. There, they projected images of rural landscapes, old home videos, and x-rays of beating hearts – the images of memories and other intangible realities. Occasionally, however, they would utilize stage cameras placed around the base of their mics but the images were distorted and constantly shifting, vibrating at the edges, presenting only more silhouettes. As far as creating an air of mystique, this lighting was perfection. The whole mood was one of an exuberant dirge – extremely fitting for a celebration of TDaGARIM.

I won’t lie – it hurts knowing that Brand New is calling it quits after they finally (maybe?) release their next record. Even with 18 years, it barely feels like we’ve gotten much time with them and, really, that was by design. After perfecting their art in a genre that thrives on sadder-than-thou personal aggrandizing, Brand New have done everything in their power to repent of their past sins and explore a career as the monks of the order of post-hardcore. As a forever emo-kid and a still occasionally disillusioned Christian, I could not be more grateful for what this band has created in this short time and, if this is the last time I get to see them, it was a perfect farewell. 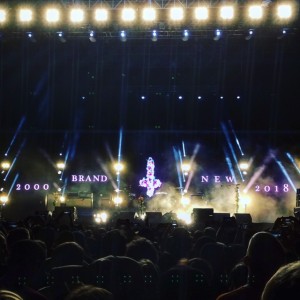